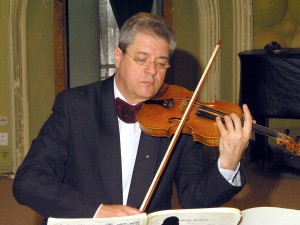 Endowed with remarkable talent and work ethic, Bujor Prelipcean can be nominated as one of the most outstanding musical personalities in Romania. After graduating from University in 1972 he was offered a job as an assistant at the “George Enescu” Conservatory, Iaşi, due to the fact that he was the highest ranking student in the country.

In the spring of 1973 he founded the Voces String Quartet, creating the oldest and the most valuable string quartet in Romanian musical history, which currently prides itself with a 3-decades history of artistic achievements.

His rich artistic activity has been rewarded with numerous distinctions. Among them we recall the title of Honorary Citizen of the Municipality of Iasi, Honorary Diploma from the “George Enescu” International Festival, Bucharest 1998 and the National Order for Merits, for special merits in promoting Romanian culture in the country and abroad.

An important figure on the national and international music stage, Bujor Prelipcean has held many important functions such as General Director of the “Moldova” Philharmonic from Iaşi, between 1984 and 1988 and again from 1999 until the present day.

OUR CONTACTS
For further information about the competition and the masterclass.